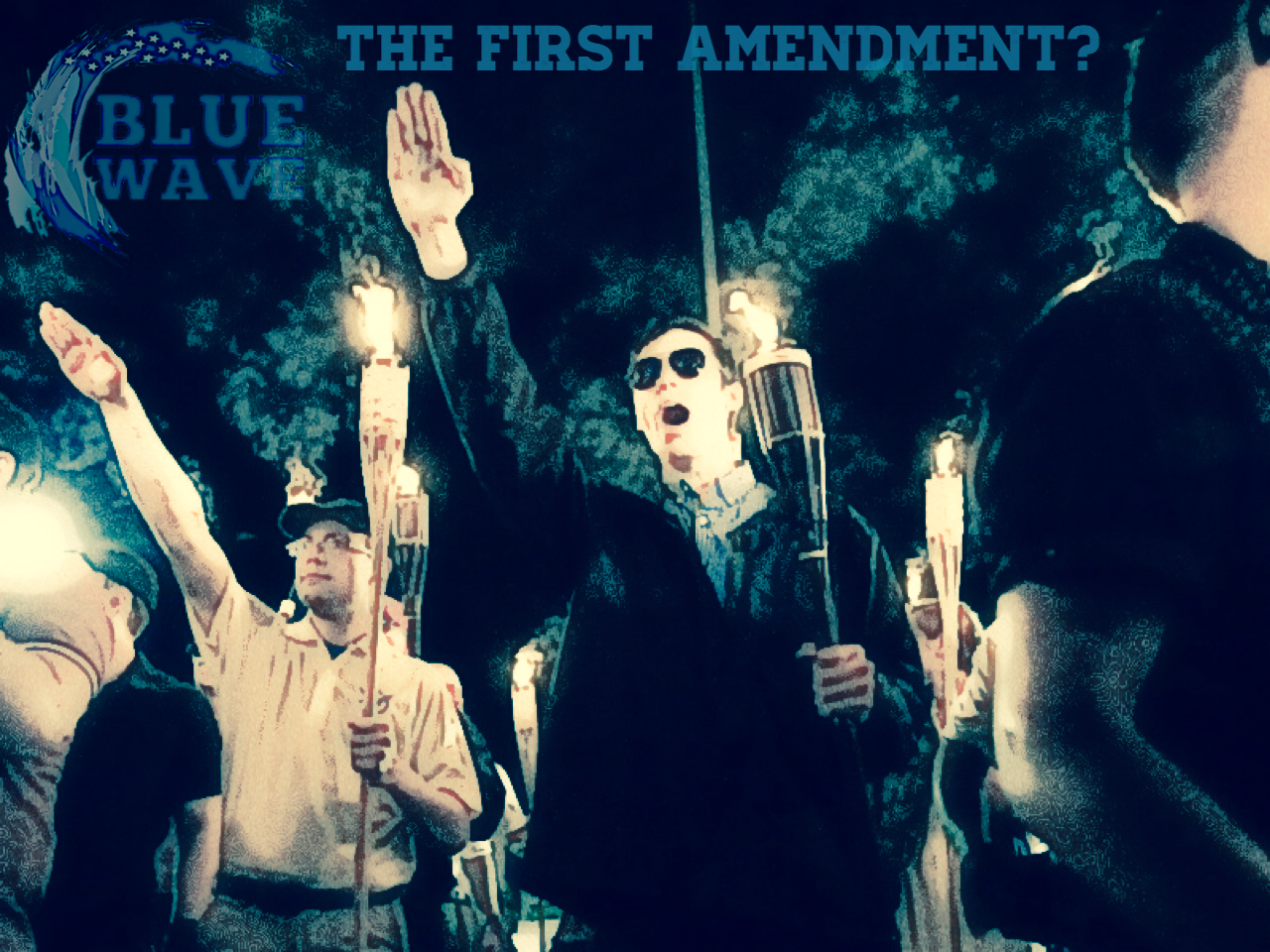 So I have been asked to talk about the political situation in the US under Donald Trump, as I see it from my perspective as a German. I have quite strong feelings and points to tell in that regard. There are in fact so many, that I really have to choose just one to talk about. All the others might follow in subsequent opinion-pieces. So the most obvious for me to choose, is: Free speech. In America, free speech is put to its utmost extreme: Pretty much everything is allowed to spread freely, even if it is against freedom and democracy – the very fundamental pillars of your republic.

While I largely agree with this notion, I also have my own background historically, to see the fatal mistake of letting certain ideological extremes flow freely without an effective measure to contain them. This is why Fox News, Rush Limbaugh and Donald Trump could do what they did, to take control of the debate, the public discourse of issues of national significance and even the highest political power, that one can ascend to in your great nation. So, It’s broadly defined, but is easily abused to impede – even rob – the American people from their rights and freedom for that same reason of being so openly defined.

For me, as a German, a humanist and progressive minded person, this is a problematic situation to be in. I always ask how we could not see that specific misanthropic element to grow out of proportion? How we could miss these very visible pointers to extremism? Is it historically justified to be oblivious about them? What would have had to happen differently in history, to justify this kind of ignorance?

Let’s assume the Austrian-Hungarian Army would have done one little detail differently prior to World War I; something pertinent that would be different indeed: Given the heavy losses the Austrian-Hungarian Army suffered during World War I, you probably wouldn’t have heard about one specific man, because he almost certainly would have died in service of this army. I am talking about a man, who wanted to be a soldier and fight for this army, but was deemed unfit for service and who later joined the Bavarian Army, so he could serve in the rather secure, if not safe position, as a dispatch-runner at the well behind the front lines situated administrative bunker. And that man’s name was: Adolf Hitler.

Yes, if the medical assessment of the Austrian-Hungarian Army would have deemed him fit for service, Hitler very likely would have died alongside the over 1 million soldiers of this exceptionally under-equipped military organization, that got sacrificed for pride and prejudice in World War I… and if so, World War II probably wouldn’t have happened at least in the way it did – if at all. But it did, and historical witnesses were telling us about how it all happened.

But still, the thing with historical witnesses is: They don’t always see the whole picture of the historically significant events of which they are the witness of. This gets to be less of a problem with time, because in time, lots and lots of experiences and lessons drawn from history are available to know better. Not listening to these lessons of history, is like wanting to commit the same mistakes all over again. Some do know and keep it silent, specifically because they want this to happen all over again. So, when I see someone complaining about the “ad hitlerum” influx in the ongoing debate about the proto-fascist Trump Administration (as I do here and there, when I try to tell people the signs of nationalism and proto-fascist tendencies in today’s America), I have no clue what the heck they’re talking about. Don’t they see what happens? Didn’t they learn the lessons from history? Recent history too? Or do they see it clearly and just want this to happen out of some dubious politically driven opportunism?

In Germany we banned those things and political “ideas” the racists and nazis in America are freely allowed to promote, because we know that all of this is utter poison for the human mind. We know: When these ideas are freely allowed to be spread and reproduced, it only needs a society that is divided and pegged ethnically and/or ideologically against each other, to blow the lid off of blatant nationalism; so that an opportunist inevitably arises to the opportunity to declare himself the savior of the people. He then defines a scapegoat for everybody to hate upon and declares himself and the likes of him as being extraordinarily special (like the inhumane nonsense concept known as the “Master-race”). Ethnic cleansing would be the next this opportunist would loudly promote. How I know that? It happened here in Germany; we have seen the steps that have been taken and quickly lead from sanity to insanity. And it happened really, really fast.

But that’s over for almost 75 years now, right? Such atrocities could never spread, grow and happen again – especially not in the United States, that fancies itself as being the “greatest and most free nation in the world”. Correct? But then I see the clips of Nazis and White Nationalists marching through American towns; screaming ethnic slurs, cursing uncontrollably, waving silly tiki torches around, flipping the bird into a thousand cameras and showing their faces to the world; unashamed and even proud of being Nazis; promoting racism or any of the other ugly xenophobic Isms that mankind ever came up with. That America allows Nazis to exist and grow right within their great nation; letting them scream their antisemitic hate largely without consequences?

Yeah, I find that crazy. Destructive. Even evil. American free speech is a great thing; but that one aspect I will never understand. And that’s not because of you, being the American that might not even know about all this in such excruciating details, but because of me, being a German who must (!) know and tell whenever it needs to be told; akin to when a friend I cherish so much (even more so than my own people) increasingly and very visibly starts to screw things up. Who falls into the same ideological traps; the same pitfalls filled with hate and grandiose egos of almighty power and an unchecked as well as irrational belief in absolute exceptionalism; the same nationalist baits the damn Nazis of the misanthropic Third Reich had setup so successfully, that it had to cost the lives of 55 million people, to rid the world from the Nazis once and… yeah, right: Once. Only once.

And because of what exactly? Because of Charlottesville. Because of anti-nazi, anti-racism protesters getting run over by a Nazi in his car – ISIS style. Because of systemic racism. Because of confederate statues and battle flags. Because of the poor scapegoat from south of the border being demonized; robbed of his rights and dignity and then put in cages or installations that resemble Nazi concentration camps more than anything. And I know – I live in Germany – I have seen what they look like!

Now take a guess of what comes next? I know it and you know that now too. There are no excuses anymore.

American free speech laws. Great thing. Really. Except for that one part that is just diffuse enough to allow for Racists and Nazis to exist largely unpunished, so they may spread their hate and poison the minds of the general American population whenever the situation is opportune. I have no idea how many people have to die to rid us from the Nazi-Plague the next time around – I only know: 55 million dead people are obviously not enough. The beginning of that nightmare was first seen with Nazi Germany; which ended in violence and left half the world in ruins and us ashamed in the horrific presence of a giant corpse pile of 6 million murdered Jews, to gawk upon while shamefully pretending nobody could have possibly seen that coming. We see it coming in America right now. I can see it. Can you see it too? I sincerely hope you do.

So what’s the remedy? Listening to history alone? Not enough; it also helps to listen to your friends. Ideologically, allegorically, humanistically – it really doesn’t matter, just listen to their account. An example: I always say to people, who give me this nonsensical “we want to preserve our southern history with our confederate statues intact and on public display”, that Germans never needed one thing to keep their dark past remembered: Statues of the Nazi perpetrators in public places. And if the Germans don’t need that, the southern United States don’t need that either. If they want to keep their history in mind, they should go and read a history book or put those statues in museum in the category “American historical figures that committed crimes against humanity”. I try to appeal to their hopefully still existing humanity, and ask: “Can you imagine, how it must feel like to walk the streets of your hometown, and come across a statue, that adulates the folks who fought an entire war to keep your ancestors enslaved?”. It doesn’t work as much as I would like, but sometimes it has its intended effect. We – all of us, regardless of origin and ethnicity – really have to explain why we did what we did, otherwise no reconciliation is possible at all.

And I know that you can overcome this problem. I like to tell my American friends one thing I’ve learned about them by looking at their history: Americans have the amazing ability to adapt to- and endure even the harshest of circumstances – while still coming out on top of it all victorious. It’s a typical American optimistic sentiment, that I have learned from you as well. Returning the favor is not always a popular move to make – some just want to feel miserable and see the catastrophe at every turn – but giving up the fight for what is good and just in America, is the most un-american thing I can think of. So I fight that as well by merely telling my American friends, what they kept telling the world in the last few hundred years :To better themselves at every opportunity they get.

So, and that is it: A rather simplified point of view, that I, as a German, have about these specific issues. I really hope it gives you a bit more insight about how you’re being perceived from the outside. Not all Germans see or understand it the way I do – but most that I speak to about these issues, make a stark distinction between the nationalism of Donald Trump and the general American public who opposes him. When we, at least the Germans I know, laugh about him, we don’t laugh about you. We just hope you can learn from our history, and get rid of the nationalistic, anti-democratic hate mongers in your government as soon as you get the opportunity to do so.