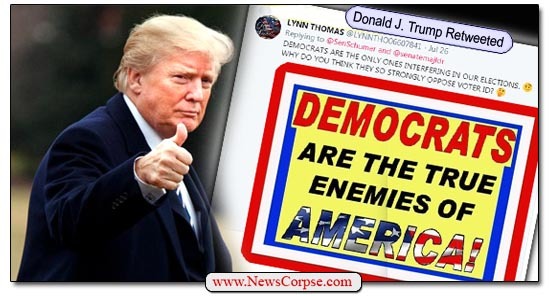 Toxic partisan rancor is at an all time high. Without looking for blame or history on it, let’s start with that simple truth as one we all agree with, left and right. On both sides, we can see the multiple paths currently possible to a complete breakdown in our Republic’s system of government if we can’t figure out a way to work together to prevent this grim reality from occuring. We all have strong opinions on what specifically the other political sports-team is doing to push our Republic into this brink, but let’s also focus on one that we can all agree is true as well; That the President of the United States of America has called Democrats “the enemy”, and has since used his office to support this idea among his base. This means that while he is your President, he is telling us that he is not ours. There is no argument that can be made that would make that acceptable for anyone in this office.

While not discussed often, this simple fact of Donald Trump, in itself, is a “High Crime” and should be impeachable. The role of the President of the United States of America may not explicitly be defined to include unifying our country to the world, it is STRONGLY implied by simple common sense: That the President of the United States of America should never consider another American, let alone half of the country as his enemy. He shouldn’t be using his followers to further divide us, and he certainly shouldn’t be pushing escalating divisive rhetoric daily. All his crimes aside, all his failings, THIS should be the one that no sane patriot of this country can dispute.

Yet it is disputed widely, and even amplified through automated bot networks that include both domestic right-wing interests as well as hostile foreign entities, both looking to advance their similar narrative, protect their party, or whatever excuse they tell themselves that let’s them sleep at night after pushing disinformation with the intent to further divide our country.

The president hasn’t only called we Democrats the “enemy”. He has also called the media the “enemy of the American people“, relative to their efforts to hold him accountable. He also has accused others looking to hold him accountable of “treason”, including the FBI when they dared try to hold them accountable. He called Republican Federal Reserve Chair Jerome Powell the “enemy” for not doing his bidding on rate-cuts for the rich. I can go on to list many, many more self-declared “enemies” of Donald J. Trump, and you know what they all have in common? They are all Americans.

So the response on the right wing is that the left made ourselves Trumps enemey long before, and may even cherry-pick some fringe element or out of context quote claiming the GOP are their “enemies”, too, but it will just be false equivalance. There is nothing that is equivalent to the President of the United States of America calling not only Americans, but a majority of Americans, his “enemy”.