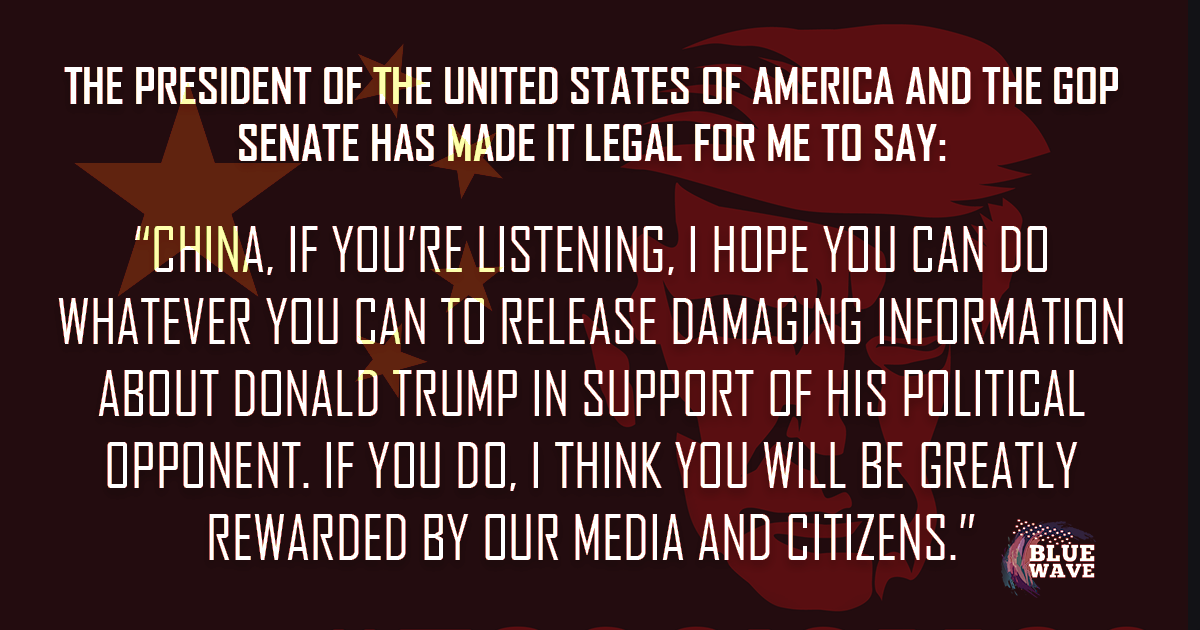 China, Europe, South America, if you’re listening. I hope you can find all the damaging information (of which there is no shortage) about The President of the United States of America. 4 years ago, this would have been treason for me to say. It still should be now, but I dare the Secret Service or US government to arrest me for saying so. The President of the United States of America, impeached for extorting foreign countries to manufacture a Russian-origin agitprop talking point against, and the GOP response, has made it ok for me to say this.

In fact, I *would* like to, as a private citizen, encourage all countries interested to manufacture scandal against the President of the United States of America, but fortunately there is enough real information for you to not have to cheat. It should be illegal for me to say that, but I dare someone to arrest me for it. Giuliani and his currently imprisoned goons did exactly this, as private citizens, no?

So if this is OK now….if we are all comfortable breaking our democracy and our rule of law, let’s all play the same games. Hackers of the world unite. Activists of the world unite. Media personalities of the world unite. Celebrities, musicians, artists and influence unite. Trump and the GOP wants you all to get in the mud with them. Don’t worry, where sedition was illegal in this country before, it is legalized now.

We can libel our Opponents. We can call anyone who tries to hold us accountable “traitors”. We can call any who disagree with us our “enemy”. We can engage in “ratfucking” campaigns against our own countrymen. We can disingenuously edit video and deepfake information to make anyone look as bad as we want to.

With Trump as president, we can lower ourselves to all his well documented tactics, and dare any law enforcement to arrest us for doing so. Let the GOP bask in its own hypocrisy, and suffer the consequences for excusing the behavior. If Trump can’t be held accountable for it, why should we?