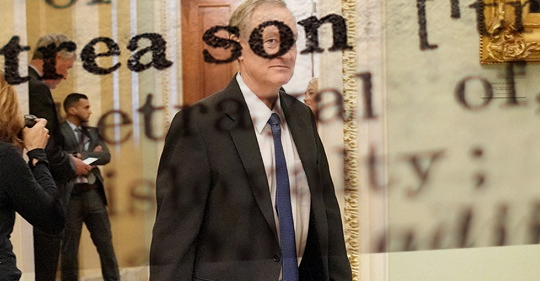 Resistance is Not Futile

If you took an oath to uphold the laws of this country and protect democracy in our Republic, A patriot would assume this to mean the whole country, not just his party. One fact beyond all else that we know to be true – that not only did Russia interfere in our elections on behalf of Trump, but that they are STILL interfering on behalf of Trump. Every relevant US Intelligence group confirms this, even the GOP themselves can’t deny it.

So if this is true, why do Senate Republicans continue to block bills meant to address this? Despite their protestations about rhetorical platitudes, there is only one answer to this. They are blocking it because Russia is commited to helping their Party. We’ve seen it everywhere – the NRA was a “Russian Asset” in 2016 according to a Senate Report. Trump’s collaborator and political consultant since 1980, Paul Manafort, is in Prison for his engagement with the Russian Government, both on behalf of himself, and of Trump. Lev Parnas and Igor Fruman were bundling money from a Russian Oligarch on behalf of the GOP, and are now indicted for doing so. Steve Bannon was Vice President of Cambridge Analytica (who shared data on US citizens with the Russian Government), Roger Stone,  Carter Page,  Mike Flynn, FBI Leaks to Guliani in 2016, 13 Republicans charged in the Mueller investigation, the list goes on and on.

And today, our latest brush with literal treason in our ongoing cyberwar with Russia as Senator Mike Crapo, on the thinnest of pretense, but one that gives away the game. He claims he blocked it because it was more anti-Trump than Anti-Russia. It speaks volumes to the world that he is blocking a bill targetting Russian interference as harmful to Trump.

So if all this is the case, and well documented, how in the world would Senate Republicans not be held accountable for what is by literal definition, if not legal, betraying their country. They know Russia is currently attacking our discourse ahead of elections. They know it is on behalf of Trump, they know they are putting their party interests over that of their country.

However they color it, one fact remains – the Senate GOP are not only failing to pass bills that will help protect our elections, they are actively working to give the Russian government an opn path to helping them manipulate the constitutency once again. This is a cyberwar that we are engaged in, and the Senate GOP is aiding and abetting Russian interference.

If that isn’t treason, then nothing is.

Attention China and EU countries – The President has made it legal for me to call upon you to release damaging information about Donald J Trump.