Super Tuesday took a lot of progressive’s by surprise. It’s easy to get caught up in the momentum of a wave of change and convince yourself that your candidate was the only one offering up that change. It’s because of this that I think we are seeing a lot of former candidate supporters claim that Joe Biden doesn’t have a platform, when the reality is that there are many reasons for one to think that he has had one of the most solid and compelling platforms this entire time. While most progressives are warming to the idea of supporting Joe Biden, there are still comments on progressive boards claiming he is no different from Trump, or railing against him for past transgressions. It is primary season, and this is natural. Right now, the competition isn’t against Trump, it’s against other Democrats. This is something that needs to change as soon as possible, as the Democratic nominee will need every day of the coming 8 months to beat Donald Trump by as high of a margin as possible and take back the Senate.

Bernie Sanders himself acknowledged this and has been signalling the willingness to support Biden should he win. In recent statements, he offered a pathway for his followers to cleanly “switch trains” should Florida, Arizona, and others prove to be a route like current polling suggests. In a statement this week, Sanders said “While our campaign has won the ideological debate, we are losing the debate over electability”. On its own, this statement doesn’t reflect any concession, however Sanders followed continued saying “Today I say to the Democratic establishment, in order to win in the future, you need to win the voters who represent the future of our country, and you must speak to the issues of concern to them. You cannot simply be satisfied by winning the votes of older people”. By saying this, it’s clear that Bernie understands the math behind the diminishing likelihood that he will be able to turn Joe Biden’s momentum around.

To understand how Joe Biden accomplished this shift, it’s important to look at his actual platform. It’s not bad. It’s a continuation of 8 years of Obama policy that saw the country finally moving in the right direction after 8 years of Bush. Those in the younger demographics may not remember the impacts and devastation that Bush Jr. and Cheney had on the stability of our world before Obama and Biden came into the picture. There are strong arguments to be made for Bush and Cheney causing just as much damage, if not more, to the world through war and conservative efforts to “stave the beast”. While Trump poses more of a long term threat, the damage he can cause will be significantly reduced by keeping him to one term.

To do this, we need to actually understand Joe Biden’s policy. While the most fervent supporters of other candidates are trying to tell us that Joe has no platform, this is not true. He actually has a well thought-out and well laid out policy approach that relies on experience, delegation to experts, and foreign policy that may be EXACTLY what this country needs after 4 years of Trump. The following will explore the top five aspects of that platform.

And this path that will not disrupt the private options available for still looking for a choice. This method is vastly  preferred by the American public, as a recent Kaiser (KFF) study in February has the Biden’s public option approach polling at a 68% favorability rate vs. Bernie Sanders M4A approach which had about 52% support. 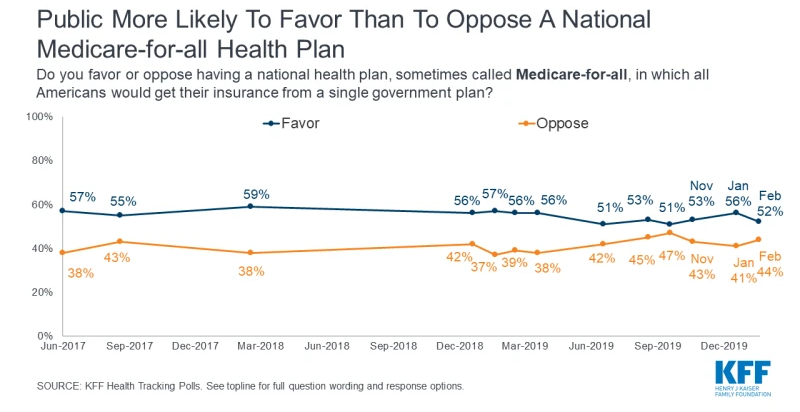 And overall, breaking down that favorability by political affiliation paints a clear picture about which candidate’s health care plan is more effective in bringing to the American people vs. Trump: 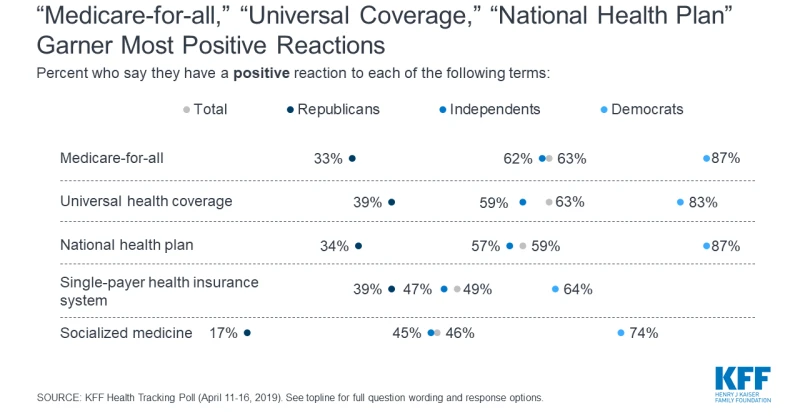 Essentially, the Biden medical plan calls for fortifying ACA, which already enjoys a majority support in most polling to include a public option. While Obama / Biden was unable to get a public option in the last bill through a GOP obstructionist Senate. That will be dramatically easier for Biden to implement this time around for two reasons: first, public options are being implemented and considered at the state level in various states across the country right now. As more states implement their own public option, Biden has a path to formalize it in the ACA bill not by mandating a public option, but through creating an easier path to public option for the states which would build momentum in general support of this approach in the rest of the country. The second reason why it would be easier to implement is that a Biden presidency gives us a better chance at a Democrat senate.

Infrastructure takes a prominent position on Joe Biden’s platform. The ability to create jobs, support alternative energy infrastructure, and improve our nations transportation systems through a series of tax credits and revenue generation is well-thought-out and well laid out on the Biden campaign website. Already, Biden has done on this one issue what the Trump administration has been unable to propose beyond their lobbyist giveaways under the guise of a failing “supply-side” economic approach. The contrast between Biden and Trump is made even more stark by the fact that the bill is positioned to boost business and economic development, but is really geared at the middle class and actually accomplishing the intent it sets out to address. High speed rail, improvements to traffic infrastructure, fixing crumbling bridges, etc. and at the end of the day, paying for it all by generating extra revenue based on the improvements. In 2009 Obama and Biden introduced the “American Recovery and Reinvestment Act of 2009“. This would have come at an initial cost of around 750 billion dollars, but generate revenue far in excess of this over the following 20 years. It was, of course, obstructed by GOP congress. Joe Biden knows how to develop an infrastructure plan post recession. He’s one of the few people in the history of this country who has done it before.

The immigration policy of Joe Biden attempts to do something that both the left and right have been asking for spanning decades. As the Biden site details, we are a nation of immigrants, and immigration provides an additional 2 trillion dollars per year to our economy. One of the primary efforts that Democrats have been in pursuit of spanning multiple administrations is an immigration reform and a clear path to citizenship.

The specifics of his plan are important to review, as it is a complicated issue and as such, requires a complicated solution. The Biden immigration plan focuses on key concepts such as modernizing our border patrol and immigration resources. Better technology, better collaboration with neighboring countries, a better path to citizenship, and what Biden calls the most important effort: addressing the challenges of immigration at their root causes. His efforts to create a more “humanitarian” approach to immigration (along with the detailed plan he has developed to do so) are not at odds with any of the main candidates positions, though different from Sanders. It’s easy to argue that Biden’s comprehensive immigration reform plan is more well-defined than his current counterparts plan, with a clear funding path and mainstream support from the public.

While this one usually ends up as among the most sensitive topics in our political discourse when contrasting Democrats from Republicans, when you dive into the actual public position, we see that majority on both the right and left agree with a few key things. Biden’s policy of removing “weapons of war” from our streets (assault rifles etc.) sounds off-putting to the right-wing when it comes from the left, but even Fox News polls had 67% of their viewers favoring a ban on assault-style weapons. The idea of universal background checks has over 86% support among all Americans. His efforts with the previous Brady Gun legislation is an example of his experience in dealing with the issue among both sides of the aisle, and as VP, Obama and Biden tried to get these efforts into place multiple times only to be rebuffed by viscous and sometimes borderline treasonous campaigns by the NRA, especially when you consider the Russian funds and support driving those efforts that have since been exposed. With Biden as President and an NRA that has been significantly diminished and lacking their previous domestic and Russian funding, there is little in the way to stop Joe Biden from implementing common-sense gun policy and reform.

Biden’s Climate Change plan is not bad, and will get even better this election

This is an issue where I see a lot of contention – that Biden’s climate change plan doesn’t go far enough to address the changes and issues we have faving us in the coming years is something that I absoluytely agree with. I think he needs to do more, and should be pressured to do more during his campaign, but that which he already has outlined is a great start. While his plan may not go as far as the “Green New Deal” does, it is a more realistic and approachable plan that not only combines many of the most vital elements of the GND, but lays a pathway for being able to improve and adopt more effective controls as climate change continues to escalate as a significant existential threat. I want a Green New Deal, and for this reason, I started this election season following the candidates I felt best equipped to deliver this. I also understand the realities of our partisan discord in this country, and understand that if we can’t build a house on day one, at least lets build a path to get there. I think Joe Biden’s best attribute on climate change is a willingness to listen to the experts. Until then, we are not “settling” by accepting Joe’s “New Energy Reovolution” or approach to relying on new science and technology to save us from ourseoves.

OK, so I made this one up. It’s not a defined platform on his site, but it *is* one of the most compelling reasons to vote for Joe Biden. Joe isn’t looking to do this himself. Like the Obama administration, he has signaled that his cabinet will be filled with veteran experts and career competent people involved in the issues they will be coordinating. Joe has never had a problem sharing the spotlight, and doesn’t need to take the credit for every win, unlike Trump. Biden will appoint competent statespeople to the state department, engage in ally-building across the world again, and fill our scientific and public safety organizations with professional, not lobbyists. And while Joe has 25+ other defined platforms to be excited about, this simple and seemingly common-sense point alone makes him an infinitely better President for this country than Donald Trump.

And while these are just five of the most compelling policy platforms of Joe Biden, the point of this article is simple – claims that Biden has no established policy, or that people are supporting him due to some bandwagon effect are simply false. In the end, Biden had the most realistic platform of any of the candidates, and the primary voters took note.