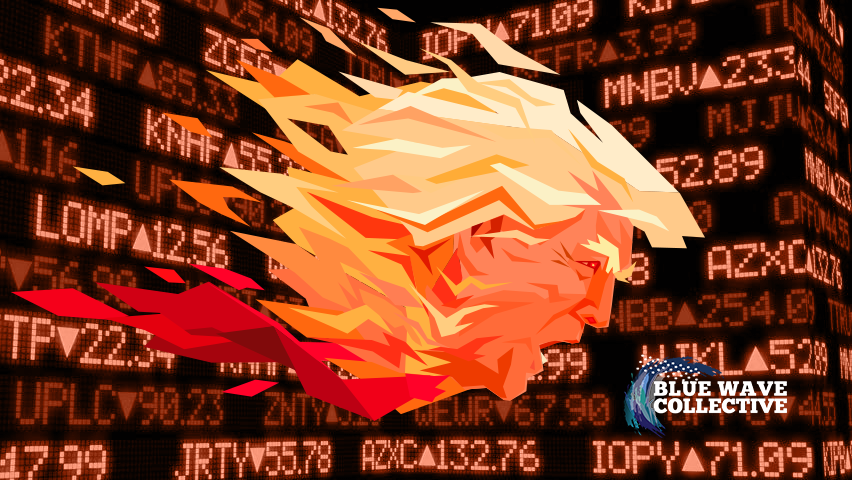 On Friday morning March 6th, we posted a new article just as the Markets opened detailing some causes of the coming crash, and that this looming recession would be the “Sword of Damocles” over Trump’s head. Today, we see that this sword has now dropped.

Trump inherited a booming economy that had continued a historic 90+ month period of growth. While recessions are a natural function of economic correction and inevitable, there are ways with which Donald Trump has worked to make sure this recession will hurt the lower and middle class. The chances of a Trump re-election after a market crash are low, but that will not stop the Trump administration from trying to blame whomever they can but themselves. So that we can all remind them and their adherents of the realities, here are the top ten ways Trump and the Republican Party have worked to disrupt a healthy economy.

Trump and the GOP passed tax cut for the rich costing US citizens up to 1.5 trillion dollars per year

That tax cuts for the rich was the first action the GOP took after Trump taking office should tell us all we need to know about the modern Republican Party. While some will argue that the tax cuts benefited all Americans, it’s no secret that what the middle class and poor got were no more than scraps at the table. The GOP communicated that our benefit from these tax cuts would be better jobs, more wealth, more investment. 2 years later, we see the markets performing far below where they were in December 2017 when the tax cuts were passed. And now, we’re going to have to pay for this recession, as corporations continue to pay zero dollars in taxes.

Appointing lobbyists and Industry magnates to sack our countries resources

Scott Pruit lead the most scandal-ridden EPA adminsitration in the history of our country. He was replaced by an energy lobbyist Andrew Wheeler who promptly used that cover to oversee massive industry giveaways from the EPA. Trump’s first Secretary of the Interior, Ryan Zinke, resigned after he, too, lead a scandal ridden feeding-frenzy that saw corporations (many lead by personal associates of Zinke) benefiting. Betssy DeVoss, Sonny Perdue,  Elaine Chao, Dan Brouillette, and more, you can see that Trump only appoints lobbyists, magnates, and disruptions to every position in his cabinet, all of whom promptly sacked this country to grab up as many resources as possible before the inevitable…today…happened.

Four-billion per month only applies to our losses stemmed from China. Total costs from Tarrif’s during this administration come in the form of higher costs, job losses, and up to $7.1 billion dollars in losses in September 2019 alone. In reality, these efforts were a byproduct of Trump “Playing President”. Tarrif restrictions have an easy implementation mechanism and it was a power Trump had, so he used it to threaten and bully. Exacerbating the job losses and raised costs, the government decided to subsidize agricultural industries. Of course, with this being the Trump administration, much of these subsidies ended up going to the wealthy and industrialized, sometimes foreign-owned farms.

Trump weakened our position on the world stage, disrupting all established trade relationships, treaties, and coalitions.

OPEC, UN, NAFTA, no historic treaty or coalition was left intact. Trump’s obsession with remaking groups with lobbyist requirements so that he can claim them as an achievement has weakened OPEC, weakened the UN by ignoring our obligations, Eliminated NAFTA to be re-written by lobbyists as USMCA, removed us from the Paris Climate Agreement, and tanked the TPP legislation (which would have been a far more effective approach to controlling China industry). And this is just a very, very short list. As a result, our markets are tanking.

The Trump administration is taking fire for how they are handling our latest crisis, and rightly so. Initially, the President himself called the Coronavirus a “Democrat Hoax”. While most would agree that accusing half of your own country of biological warfare for political gain is treason, but Trump has made treason great again and will face no consequence. Not only did Trump eliminate the US pandemic first-response team, he cut the CDC funding to prevent global outbreaks in countries (including China) by 80%. As our markets crash, you will see many wanting to blame COVID-19, but this was only a trigger to the tinder Trump has been laying for three years. And now it’s going to burn.

Many people rail against Obama for wracking 9 trillion in debt during his presidency don’t understand how the GOP is sabotaging this country for Democrat presidents. Bush Jr. handed the Obama administration nearly 1.5 trillion in deficit (which would become 8 trillion in debt in the coming years of Obama/Biden), and wars contributing to more than 5 trillion in costs since 2001. It took Bush Jr. 8 years, two wars, and a whole new defense infrastructure to charge up that kind of deficit. Trump has done it in 2.5 years.

It’s actually not all Trumps Fault, but his administration isn’t doing anything to help the real problem

The GOP platform is tax-cuts for the rich, simple as that. It was their first effort when they took office, and Trump financial advisor Kudlow is pushing similar solutions to our current market crash in Trump’s ear probably as I write this. The solution from the Fed and it’s Chair Jerome Powell is likely to cut interest rates yet again, further boosting corporations earning power. None of them are looking to address the real culprit of this crash – debt. Our Global product, meaning value of all the worlds assets, was just short of $90 trillion dollars in 2018. The debt in the world, including private debt, is nearly triple that amount at $257 Trillion dollars. Any economist will tell you this is very, very, bad news for all of us.