Last week, when the markets hovered around 25,000, it was clear that the 1.5 trillion dollar a year tax cuts for the rich did nothing for our markets or economy other than allow more companies to pay zero taxes. The table scraps that the tax cuts gave to the middle class and poor were nowhere to be seen, as taxpayers ended up paying $90 billion MORE in taxes under Trump administration tax policy overhauls. Despite this, the GOP is going to run on it in 2020. And why not? Judging by the timing of the tax cuts for the rich, it was their top priority in 2017, and the first major legislative action they took.

Today, the markets halted shortly after the opening bell. As we posted just before the markets opened on March 9th, the world is about to enter into a recession, one that will change the lives of every human on this Planet. There is a juxtaposition between climate change, Coronavirus, and modern consumerism that has, at this point, come to a head for all of us. There is one certainty that you can take from this: Change has come to our markets, our industries, our buying patterns, and our daily way of life.

Our markets will recover some, though the days of industrial production, ubiquitous plastics, non-renewable energy, etc. are over, broken by the quickening of industry corruption and lobby-ran EPA’s. We were already on a climate precipice. Trump simply tied our hands and kicked us over it. Sound like Hyperbole? It should be, but it’s not when you can say that Trump’s first EPA Head saw over the most corrupt EPA in the history of its existence. Ryan Zinke, Trump’s first pick for the Interior oversaw the most corrupt administration in its history as well, and only second in line to its associate organization’s corruption through Pruitt. So far, neither one faced criminal charges despite investigation. Both agencies were put into the hands of Oil Lobbyists, both better at hiding the ongoing corruption.

Trump could have avoided taking responsibility for this, like he does with all other things that are most definitely his fault. A national Pandemic Response Team (like the NSC Pandemic Team that Trump disbanded) is exactly the sort of thing you want to have for this kind of scenario. They would have taken the threat seriously, as opposed to claiming that it’s reporting was a Democrat hoax meant to damage him as president. Four months ago, a bipartisan group in congress pushed for the resources of this office to be restored after its previous director was pushed out by John Bolton. In response to being held accountable Trump played defense instead of coming up with a plan – calling those who were taking what would later become an official pandemic seriously perpetrators of a “Democrat Hoax” to damage his presidency on February 29th. Just over a week later, the markets would start to crash, and Trump would be forced to go up before the nation and explain his pandemic response.

That explanation was problematic, as the markets would indicate the very next day. Our markets crashed to the point of having to be shut down. Since then, every time we see a Market “dead cat bounce“, we have seen the Trump administration start to celebrate their economy, only to be crushed again by the realities of this market. Now, three years into Trump’s reign, we are watching a broken country crumble further, with no leadership to stop the decay. Trump’s explanation to the nation was more concerned with branding it as not his fault…making sure to emphasize it as this “foreign” virus, and blaming the European Union for not closing its borders. Since these actions, the markets continue to tumble today, and by the end of this day, it will be confirmed by many economists that we are about to enter a world recession.

Republicans didn’t believe in the Coronavirus – until they did

And sadly, it is only starting to happen in the last couple of days. I’m sure we all see on our Facebook walls, those of the right-wing persuasion calling it a hysteria as recently as the last couple of days. Anecdotally, I’m sure we all see the shift to them taking it seriously now. Trump’s rhetoric to the country was again not to unify us during a pandemic, but to further divide us and foment more partisanship through projecting treason.  He was absolutely the reason the right-wing decided to not take it as seriously, as demonstrated by his top flunky and political crony wearing a gas-mask to vote on the initial Coronavirus pandemic response bills. 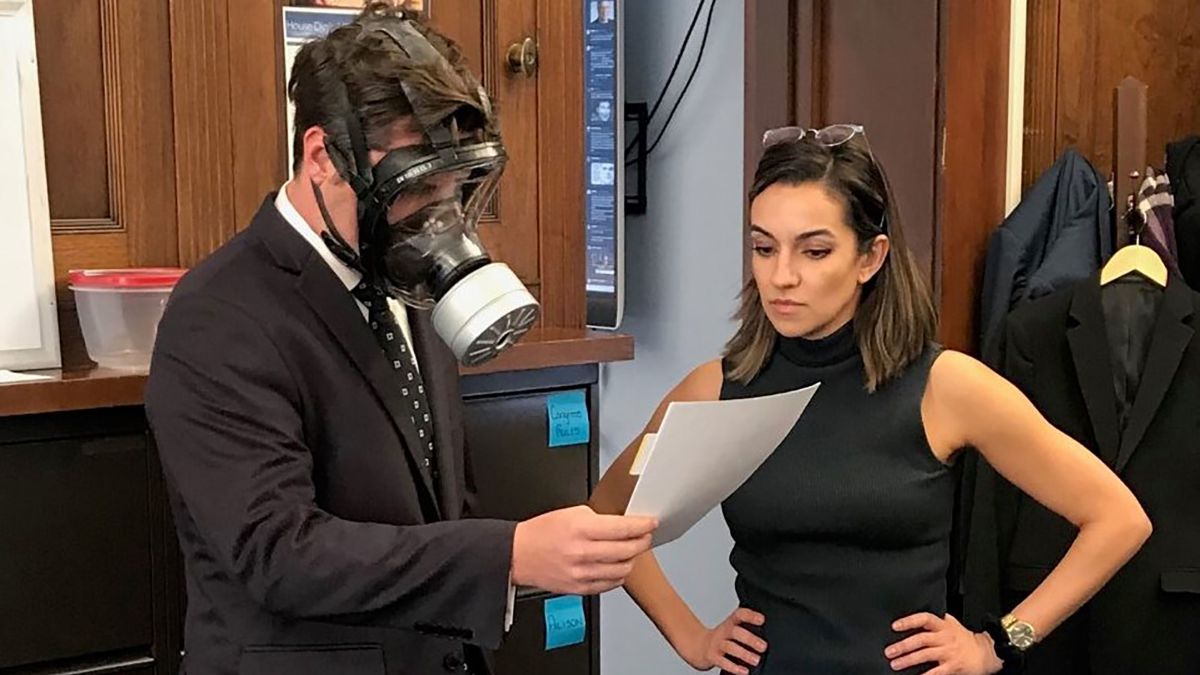 It’s in image that will haunt him forever, and well it should. This type of belittling of others is the first line of attack in the Trump administration. Blame Obama. When you can’t do that, Find another “lib” to blame. When you can’t do that, belittle the “libs” who are taking it seriously. This is the bulk of response behavior in the Trump administration, and it is absolutely empowered by this president and his consistent party line attacks and divisive rhetoric.

“Teflon Don” Can’t Escape This One

Most Republicans know that the secret to gaming the economy in their favor is to Starve the Beast on the way out. Because of the uncertainty around investigations, consistent corruption charges, and Trump’s chance of making it a full term, they started starving the beast the moment they took office. The silver lining of this (if there even is a silver lining to global plunder, thousands of preventable deaths, global recession, and kids still in cages) is that Trump wasn’t able to put it off until after the election. This is all coming to a head now, and things for every human in this world will never be the same, and there is nothing Trump can do to stop it.

As we have previously written, Coronavirus is not the cause of this. It is the catalyst that prevented Trump from exaggerating market figures and using the fed to play mind games with investors. He can’t stop this, and does not realize what the markets already know – That today, Trump lost the 2020 election, as revenues for Q1 are going to take massive hits again in Q2, and In Q3, it will all be announced. In September, just before the election for the next President of the United States of America. And the person he will be going up against was the Vice President in charge for 8 years of cleaning up the messes of George Bush.